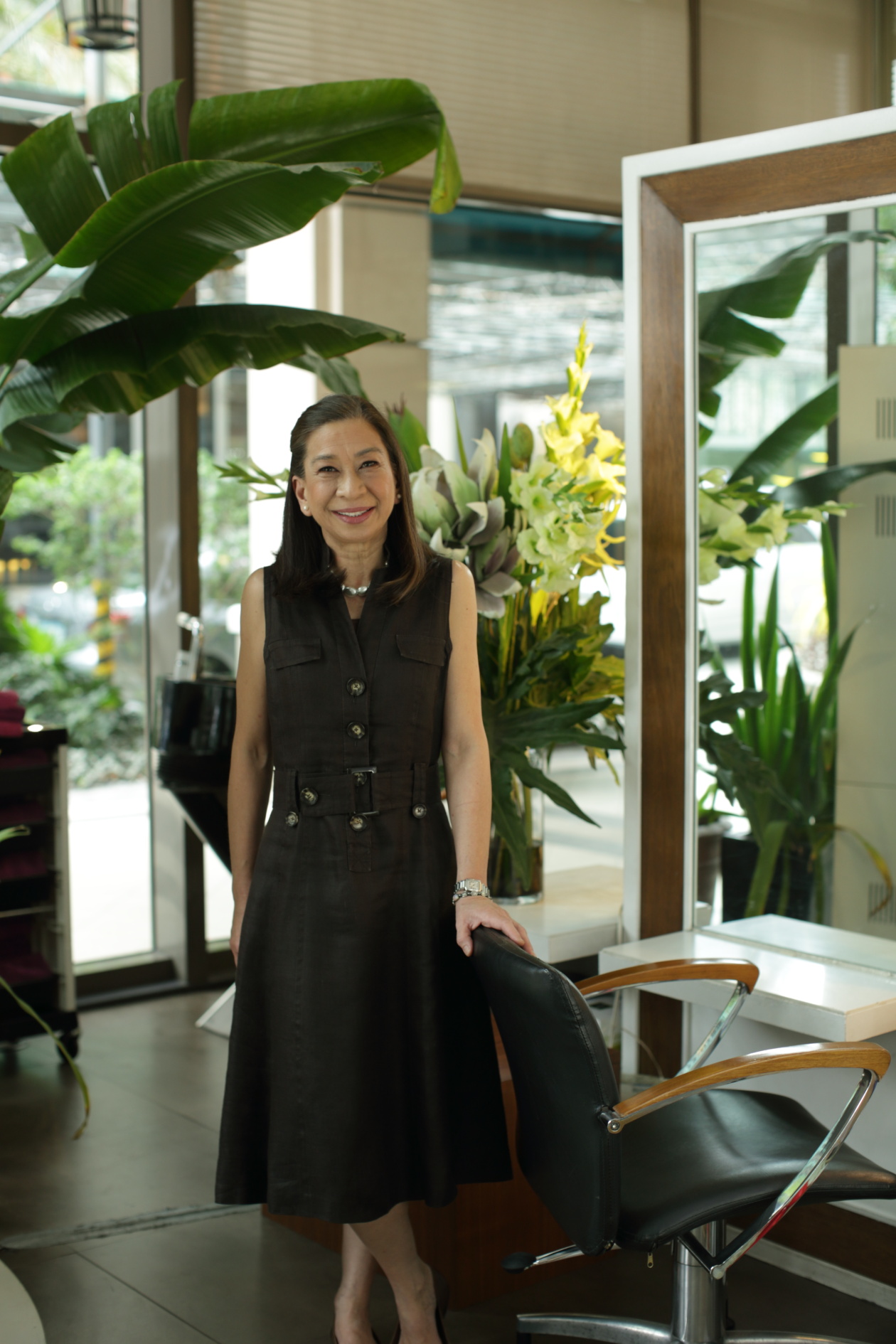 Margie Manzano Olives, a loved personality in the Rockwell community, has been a fixture here for almost two decades. A friendly face, you probably know her from Emphasis, a Rockwell institution that draws on a loyal following from all ends of Manila.

Emphasis, of course, is an enduring landmark that has become an integral part of the ever-growing Rockwell community as women, men (and children) have come to depend on this high-end, full-service salon for their hair and nail care, as well as derma services.

When not holding the fort down as the ambassadress of this mecca for grooming and beautification, Margie takes time out with her husband, Monchet Diokno Olives, and Bambi, a 13-year-old French bulldog, who sleeps all day.

Known as The Fan Man, Monchet, who spent his entire professional career with ABS-CBN, keeps busy these days with his family businesses, Casa Mercedes and Monchet y Compania (their speciality is producing bespoke fans or abanicos).

After residing some years in San Francisco, the Oliveses moved back to the Philippines and into West Amorsolo Square in 2001, then transferred to Joya North eight years later.

How things have changed. Margie, now 54, recalls a time when she used to live in the area as a little girl and the Rockwell then was pretty much just the Meralco Power Plant. “I would bike along the fence of the large grassy lot with my siblings and my friends, amazed at the towering chimneys of the power plant, and the gigantic, silvery steel spaceship-like circular structures around the plant where the oil was stored.”

Moving back to Manila—Rockwell at that—was not only a smart move for the couple, but a significant one. “Monchet and I are both the youngest children. His parents were deceased when we got married, so it was just my mom. She asked us not to move too far away and as Monchet really loved my mom, he decided to get a unit at Amorsolo so that we could be near her,” she fondly shares.

But Rockwell played a role, too, as far as career decisions went. It was an unfortunate incident in 2000 that led to a concentrated effort to find a new job for Margie. At the time, she was working in the Intramuros area teaching customer service at a shipping manning company.

She got stuck during rush hour in a typhoon-induced flood and by midnight, she had given up and decided to stay in what was believed to be the haunted Heritage Hotel. Powerless and stuck on the other side of town in Quezon City was Monchet.

“He got me a job which I initially resisted, obviously because I knew nothing about the beauty business,” remembers Margie. “I didn’t even visit a salon regularly! The only salon I knew was Norma’s Beauty Parlor a few doors away from Be Beautiful for Him outside of Bel-Air, which I would go to twice a year to get a haircut.”

It was in December 2000 when she was contracted to set up the original Emphasis at the Rockwell Information Center (which is now where One Rockwell is situated) for the owners, and hasn’t looked back since. “On the day I was to meet the legendary Mr. Teng Roma [its founder] to be interviewed for the job, I was terrified,” recalls Margie, “I tweezed out all my white hair and arrived with a throbbing headache from all the plucking. I did, however, get the job, and with Mr. Teng’s expert guidance, turned this challenging experience into one of the most fulfilling milestones in my life.” 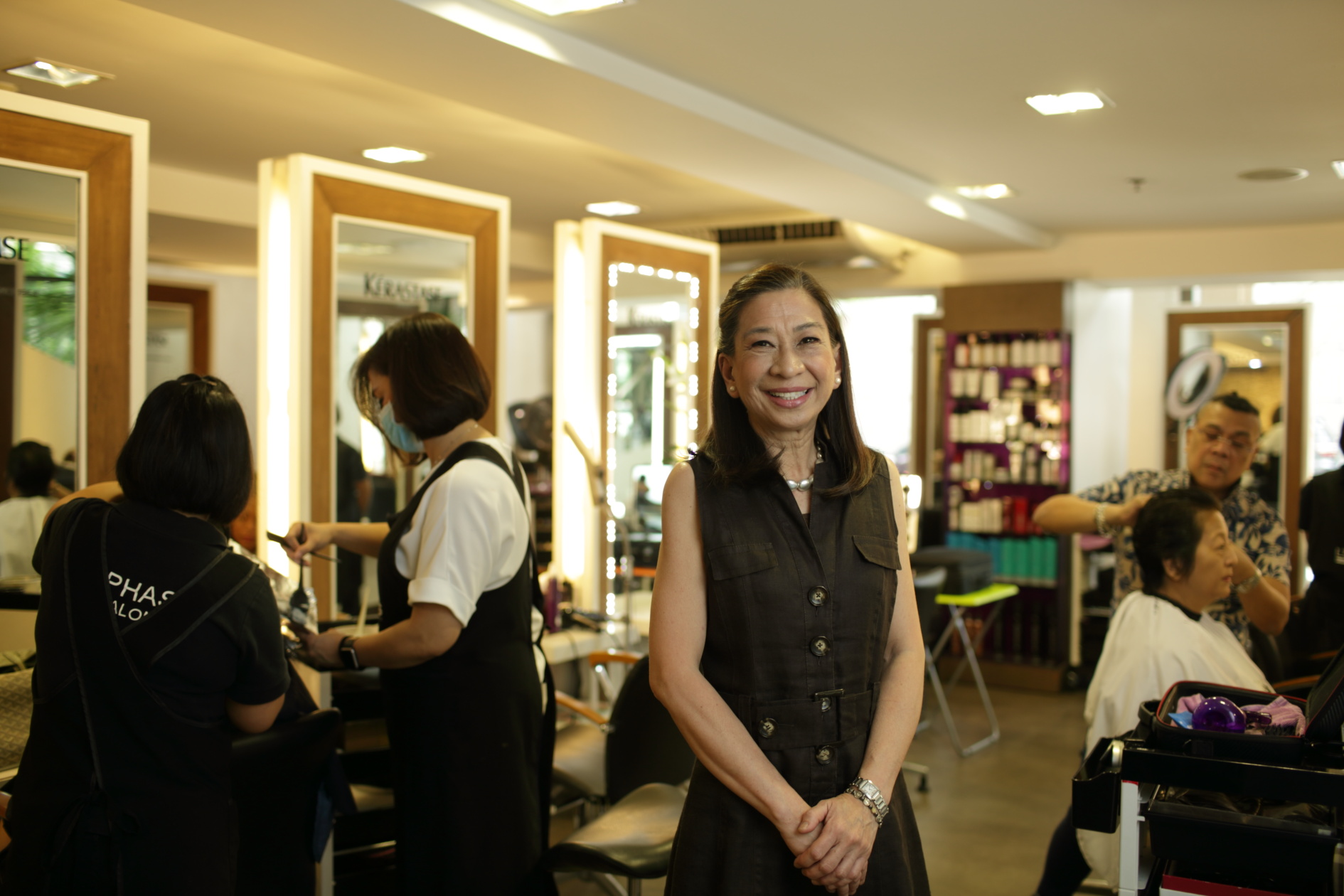 During the set-up stage, Margie remembers her and Teng walking down the steps of Amorsolo Square one evening when suddenly he stopped in his tracks and said, “How about Emphasis?’ He had a lightbulb moment on the steps of Amorsolo! After weeks of thinking of a name for the salon, we finally had it!” she reveals.

After managing the original Emphasis until 2007 (it relocated to the ground floor of Joya where it is now on its 19th year of operation), she retired only to return three years later to take care of customer service and handle the day-to-day care of clients.

Aside from her landing her dream job, ultimately, the decision to move to Rockwell proved to be one that was filled with positives for the couple. Aside from being near her mom, Rockwell’s central location provided them with an avenue to see more of their friends and relatives. A means to keep ties close if you will.

“The list of reasons why we stay here can go on forever,” she says. “The security in this community is the best thing that keeps us at Rockwell… and of course, the fact that when Manila is in darkness without electricity, or— these days—when the city has no running water, Rockwell is up and running.”

Also avid travellers, the Oliveses, who can count an adventure to the coldest capital in the world, Ulan Bator, and a 34-day, 800-kilometre “trek” across Spain armed with a backpack and a single change of clothes as some of their most memorable adventures. “It is always knowing that Bambi is safe while we are away and that we have a haven to come home to,” that cement those feelings of security. “We are happy here. Rockwell is our city, our home.” 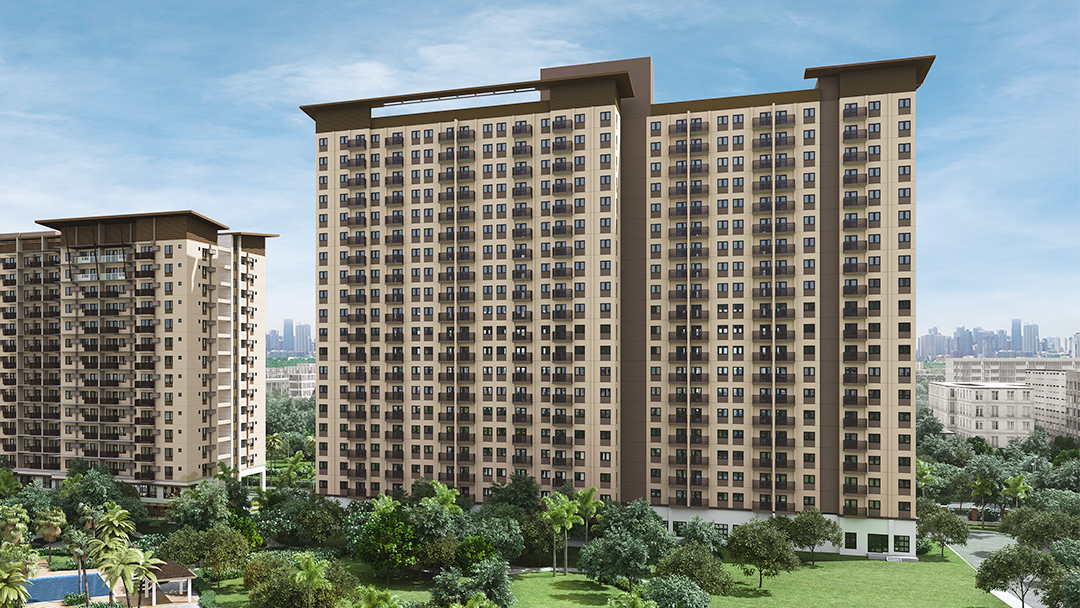 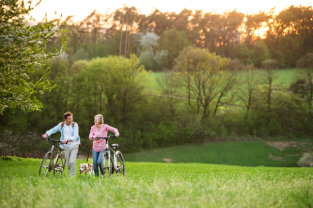